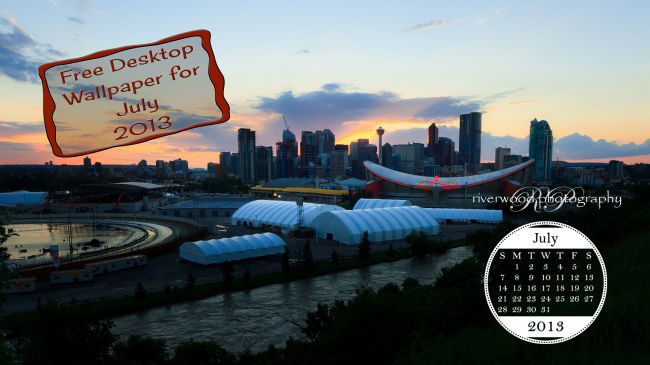 As a little bonus for my friends and followers every month I provide a free image for use as your desktop background wallpaper on your computer. Each beautiful photo is a picture that I have created and it always includes a calendar overlay for the month. I know that I’m always looking for a calendar and having one on my desktop is very convenient!

The Lights Went Out

The wallpaper image for this month is an homage to everyone in the city of Calgary that was affected by the Floods of 2013. Which is of course everyone (in some way or another). The devastating floods caused massive damage across the city and resulted in power outages throughout many communities and the downtown core. This image was created at Scotsman’s Hill overlooking the Calgary Stampede grounds and the city skyline. The power was out across the entire downtown and you’ll see that there are very few lights on in the buildings in the city. It was a very eerie site and one that I don’t expect to see again anytime soon.

So this image goes out to all those that suffered damages, and to those that helped in their time of need. It was an amazing week to be in Calgary and I don’t think anyone that was in the city will soon forget…

To install the image as your desktop background, simply click on the link below that corresponds to the file resolution you would like to use. When the larger image appears in your browser window right-click on the picture and select “Set as Desktop Background…”.

For some browsers (Google Chrome for sure) you may have to choose “Save As…” to copy the image to your desktop first. You can then right-click on the file on your desktop and choose “Set as Desktop Background…”.

Apple iPhone 4 or 4s, and most Android Phones:
Horizontal | Vertical