Image in Use: eCanada Bond Review 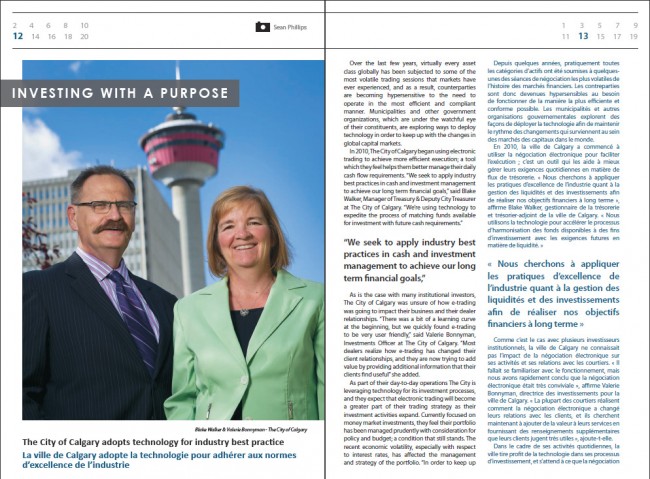 I was recently contracted to create an editorial image for the Fall/Winter issue of “eCanada Bond Review“, which is a financial industry trade publication produced by CanDeal for their clients. The image was to support an article about the City of Calgary’s use of electronic trading technology in its treasury department, and was to feature 2 city employees. There were no specific instructions on what the image should depict, other than it should be a portrait of the 2 employees. I wanted to create an image that showed something of Calgary rather than to just show the employees in a faceless corporate environment (as editorial images used in corporate magazines so often do).

Because the subjects of the photo both work at City Hall in Calgary it immediately made sense to step outside so that we could include the Calgary Tower in the image. We shot a number of other corporate style images using the glass and metal of the Plus 15 as a backdrop, but I was pretty sure that they would end up using one of the Calgary Tower images. Sure enough they did.

You can download the magazine from the publications section of the CanDeal website if you want to learn more.